Travel to Dhamma Dīpa and and Dhamma Padhāna might be affected due to the Covid-19 pandemic. Please refer to your course confirmation letter regarding travel arrangements and make sure you have the latest travel information.

If you are travelling to the UK from overseas please read this important information for Vipassana Meditators.

Please choose from the options below for advice on how best to reach us. If you cannot find the answers you need then please contact us on:   [email protected] 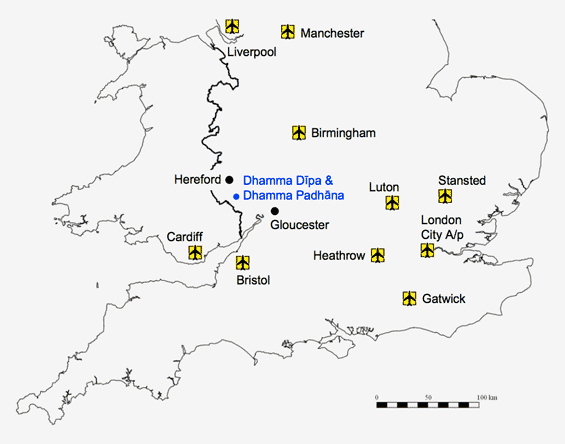 All students are asked to arrive between 2 and 5 pm on the day the course begins. After registration is completed, a light meal and orientation will precede the start of the course.

The course will end at approximately 7:30 am on the last day of the course. All new students, as well as old (returning) students taking a full course, are required to remain until the very end of the course. Part-time old students will not be permitted to leave on metta day, the tenth full day, except in case of emergency or by prior arrangement with the assistant teacher(s).

There are several routes to the centres. All routes will eventually take you either to Ross-on-Wye (7 miles), Hereford (10 miles) or Gloucester (25 miles), the three nearest towns/cities.

The Vipassana Trust organises a direct coach service from Gloucester to Dhamma Dīpa/Dhamma Padhāna on the starting and finishing day of every course. Otherwise you can use a bus or taxi from either city (details below).

‍Travelling from inside the UK

There is plenty of car-parking space at the centre.

Note for owners of electric vehicles

There are no EV charging units at Dhamma Dipa and Dhamma Padhana.  The closest EV charging points can be found in Ross-on-Wye (15-minute drive) and in Hereford (25-minute drive).  Please ensure that your vehicle is sufficiently charged before arriving for your course.

The nearest postcode is HR28NG but it is better to use the address Dhamma Dipa Vipassana Meditation Centre, Pencoyd, St Owens Cross.
You can also use  these coordinates: Latitude: 51.937 / Longitude: -2.718 (equivalent to North 51 degrees 56 minutes 2 seconds, West 2 degrees 43 minutes 0 seconds).

‍By coach or train Back to top

The Vipassana Trust organises a coach service on the starting and finishing day of every course between Gloucester and Dhamma Dipa/Dhamma Padhana. The coaches leaves from Gloucester train station. (Note that this is not Gloucester Road Underground station in London). The railway station is 100 metres walk from the town's coach station.

For Dhamma Dipa courses, there will be two coaches, the first departing at 3.45pm and the second departing at 4.00pm.

For Dhamma Padhana courses, there will be one coach departing at 3.45pm.

At the end of the course, the return coach will leave at 9.00am from Dhamma Dipa/Dhamma Padhana and arrive at Gloucester train station around 10am. At the end of 3-day courses the coach leaves at 5pm and arrives in Gloucester around 6pm.

It is a non-refundable return (two-way) ticket and the cost is £22+booking fees. This is payable online by credit card, debit card or PayPal. No single fares are available.
Important: this ticket must be shown to the driver. There is no refund if you cannot travel or miss the coach for any reason.

Ticket booking closes at 10am, the day of the start of the course. If you have not booked a ticket by then, you will have to use a local bus or taxi.

For return journeys to Gloucester, Hereford, Ross-on-Wye, Heathrow etc., you can also share a local taxi with other people at a preferential rate (and at a different time from the return coach). More information will be put up on the last day of the course, when you will be able to make arrangements.

For long courses only (twenty-, thirty-, forty-five- and sixty-day courses) there is also a coach service on the day before the start day of the course (Day -1), leaving Gloucester Train station at 5pm.

If you wish to buy a ticket for the Gloucester coach service, Click here. Please do not contact the centre directly about this coach service – if you have any questions about travel to the centre, please email [email protected]

From either direction on the 33 bus, ask to be let off at the Harewood End Inn bus stop.

On the starting day of each course, the centre car will come and pick you up from the Harewood End Inn bus stop, provided you follow the steps below. Please do not attempt to walk from here.

In order to arrange this, please call the centre once you are on the bus (from Hereford or Gloucester) on 01989 730234 or use the freephone number 0800 9177377 and tell the centre managers what time your bus departed so that a car can be ready to collect you. If you are unable to call once you are on the bus from Gloucester or Hereford or you don’t have a mobile/cell phone, you can use a public phone booth, when you arrive at Harewood End Inn bus stop; it is located opposite the Harewood End Inn. Use the freephone number 0800 9177377 – no cash or card required. However, please be warned that it may not be possible for centre staff to arrange an immediate pick-up at short notice, meaning there may be a delay in picking you up.

Please do not disturb the owners of the Harewood End Inn or the neighbouring homes by asking to use their phone, and please wait for the centre car on the opposite side of the road from the inn.

‍By taxi Back to top

Taxis should always be booked in advance to avoid an initial delay in the pick-up. The companies have a variety of different-sized vehicles, so if more than one person books a taxi at a similar time of day they will group them together so the cost can be shared. If you prefer not to share a taxi please notify them at the time of booking.

For more information or to pre-book a taxi contact:

Please note, that the prices can be changed due to the rising prices of the fuels.

‍Travelling from outside the UK

‍Flying into Birmingham, Bristol and Cardiff Back to top

Airports at Birmingham (BHX), Bristol (BRS) and Cardiff (CWL) are close to the centre and coach/rail connections are available from them to Gloucester or Hereford.

Heathrow is closest and most convenient for Dhamma Dīpa/Dhamma Padhāna.

Flights to Stansted and Luton are usually less expensive, although the extra distance will add a few hours to your journey.

Airports at Liverpool (LPL) and Manchester (MAN) have low-cost airline flights from the continent. Rail connections are available to Hereford.

Birmingham airport has its own railway station – Birmingham International station – from which you can catch a train to Gloucester or Hereford. You may need to change at Birmingham New Street.

From Bristol airport there is a coach to Bristol Temple Meads railway station from where there are regular trains to Gloucester.

The simplest and cheapest way to get to Dhamma Dīpa/Dhamma Padhāna from London Heathrow is by coach. Coaches run from other London airports to Heathrow, at least once an hour. See the National Express for coach times to Gloucester.

Please note: a return ticket only costs a little more than a single, and considerably less than a single each way.

Heathrow Central Bus station is located between Terminals 1, 2 and 3 and above the Underground railway station. To get there from Terminal 4 and Terminal 5 there are free rail services called Heathrow Express and TfL Rail (formerly Heathrow Connect).

Both airports have local stations with single-change rail services to Hereford. There is a good service back from Hereford to Liverpool airport on a Sunday morning.

From central London, trains travel from Paddington to Gloucester or Hereford (see National Rail Enquiries). The Circle line of the Underground (the Tube) connects St Pancras to Paddington.

‍Return journey Back to top

It is sometimes possible to get a lift by car with other students.

At the end of the course there is a coach service leaving the centre at 9 am and arriving at Gloucester railway station around 10 am.

At the end of three-day courses the coach leaves at 5 pm.

For the return journey to Gloucester, Ross-on-Wye, Hereford or Heathrow after your course, you can also share a local taxi with other people at a preferential rate at a different time. More information will be put up on the last day of the course, so you will be able to make arrangements then.

On Sundays public transport is poor, with local buses not starting until the end of the morning. For the times of coaches to Heathrow leaving from Gloucester, visit National Express.

‍Contact Details Back to top

If you have any questions about travelling to the centre, please email:
[email protected]

‍Lift sharing Back to top

‍Useful links Back to top