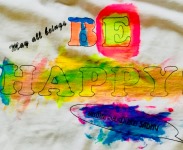 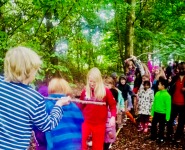 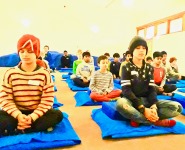 What is Anapana meditation?

Anapana is a simple meditation technique. The children learn how to observe the natural, normal breath as it enters or leaves the nostrils. It helps them to calm down their mind and to concentrate better. As well as helping the mind to calm down, Anapana also helps them to understand themselves and how their minds work. They will gain mastery over their impulses and behaviour. They will develop an inner strength that helps them choose the right and appropriate actions over wrong actions. Anapana is a tool that can be used to help deal with agitation, and with the fears, anxieties and pressures that they might experience in childhood and adolescence.

Why would a child attend an Anapana meditation course?

Practising Anapana can give many benefits, including:

Where does the technique come from?

This technique of meditation was discovered by the Buddha. He was born as Prince Siddhartha about 2,500 years ago in Nepal, a beautiful and peaceful country in the Himalayas. Because so many wise and saintly people had meditated there in the distant past, the vibration was so good and so conducive towards meditation.

All truly great humans start to show signs of their greatness from a very young age, and so it was for this boy too. At the age of about five or seven years old he learned a technique of concentrating his mind, of becoming the master of his mind. This is how it happened:

Every year his father the king would participate in a festival. Part of the festival was the spectacle of the king ploughing a field, and naturally people would gather around to watch. The young prince was taken along to the festival by his nanny so that he could also enjoy it, but after a while he lost interest and felt sleepy. His nanny put him down under a tree so that he could rest, and when he fell asleep she went off to enjoy the festivities herself. When the young prince woke he found that he was all alone. He wasn’t interested in rejoining the festival, so he decided to sit up, crossing his legs and closing his eyes. And like that he started feeling the natural breath coming in and going out of his nostrils. His mind became very concentrated, calm, tranquil and peaceful. It was such a wonderful experience for a child of about five or seven years old!

Years later, when the boy had grown up and was twenty-nine years old he decided to leave the royal household. He wanted to find out why there was so much unhappiness in the world, what the cause of the unhappiness was, and whether there was a way out of it. For six years he travelled in search of the truth, practising different techniques and working in different ways to find a way out of suffering. Then one evening, when he was sitting under a tree – a Bodhi tree – he suddenly remembered his early experience of meditation from when he was a young child: “When I started observing my breath all those years ago I felt so peaceful, so concentrated. Why don’t I try doing it again?” he said to himself. And so he did. And this was Anapana meditation, the first step that he took on the path to becoming truly peaceful and happy.

Testimonials from parents of children who have attended Anapana meditation courses

“Our eleven-year-old son has participated in several children’s Anapana meditation courses over the past few years. There is a noticeable change in his temperament after completing each course, with him appearing calmer and more relaxed. His general volume is lower and he seems more content with his own company, as well as mixing more harmoniously with the rest of the family. His emotions, which can be up and down, are more evenly balanced after a course and he himself has reported that he feels generally happier. Although at times our son finds the meditation sessions during a course challenging, he still enjoys the course overall, aware of the benefits it brings. He always looks forward to attending the next course. He likes the games and activities, which are laid on so thoughtfully, and he enjoys playing and interacting with the other children in the caring and inclusive atmosphere created there.”

“I feel like my children benefited a lot from coming to the children’s courses. When they were younger they came very happily and had a lovely time. As they got older, there was more resistance to the idea of coming away on the course, but they still enjoyed it just as much when they did. They haven’t come away determined to wake up early every morning to meditate for ten minutes, but I feel that learning the technique of Anapana meditation has given them a very important foundation that they can come back to when they are older.”

“My son has been attending Anapana courses for children and teens at Dhamma Dīpa for many years. I have noticed huge positive changes in his behaviour and his character as a result of these sittings. He has developed increasing powers of concentration and focus and is generally a calmer, more thoughtful and happier person. I would passionately recommend the course to parents of all teenagers. They will be taught an amazing tool that they can use for the rest of their lives. Dhamma Dīpa is an oasis of kind, helpful and caring people working towards a greater good. I believe the Anapana course has helped my son fulfil his potential. I am very grateful that he has had the opportunity to attend the courses.”

“As a parent and volunteer on courses I have seen my own children attend Anapana meditation courses and have experienced their behaviour and personalities intimately at home. I have seen many children come to courses and, over the years, many of them returning again and again. I feel privileged that I have gotten to know some of them quite well. Sometimes it’s not immediately obvious that a child has learned anything. They fidget, they open their eyes, they’re distracted. But when you talk to them, it can sometimes be clear that they have gotten something very valuable from their time at the meditation centre. They know this themselves. I think it’s such a precious thing for a young person to get a few moments of real inner peace, even if it’s literally for only a few moments. I believe that something stays with them from that experience, a seed that will grow in future and bring them wholesome fruits. As a parent, it’s very fulfilling to have given my children this opportunity. As a regular volunteer on the courses, I feel very fortunate to have the opportunity to help facilitate many children to take their first steps in gaining self-knowledge. It’s quite remarkable for such young ones to be doing this.”